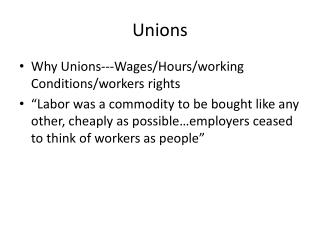 Unions. Why Unions---Wages/Hours/working Conditions/workers rights “Labor was a commodity to be bought like any other, cheaply as possible…employers ceased to think of workers as people”. Unions. The Unions came from a series of problems No long term employment guarantees