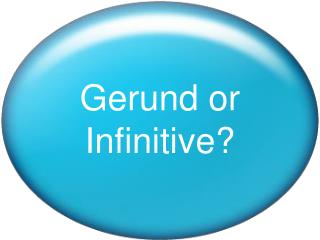 Gerund or Infinitive?. We select the –ing from. To create a NOUN from a verb to express a general idea(Subject of the sentence in most cases): “ Paying attention is essential in class”. After any preposition : “I am looking forward to hearing from you”. Infinitive and gerund in English versus overt and covert derived nominal in Arabic - . dr. walid amer. infinitive and

Infinitive Phrases - . definition . an infinitive is a verb form, usually beginning with the word “to,” that can act

Gerunds and infinitive - . a few verbs can take an infinitive or – ing form but the meaning is different :. try. a) if

Infinitives and Infinitive Phrases - . an infinitive is formed from the word “to” together with the base form

Bell-ringer Activity 8: Infinitive phrases - . copy the following: a split infinitive is the error of putting an adverb

GERUND AND INFINITIVE - . v+ing or to v ?. gerund or infinitive ?. some words are followed by the gerund. e.g .: doing

Verbs and Expressions that Use the Infinitive - . p. 71 realidades 2. verbs that use the infinitive. when you use two

“The pen is the tongue of the mind.” - . gerunds &amp; gerund phrases. showcase your word choice and increase

Gerunds- verbal nouns - . consider this sentence. discere est utilis - to learn is fun or learning is fun the infinitive