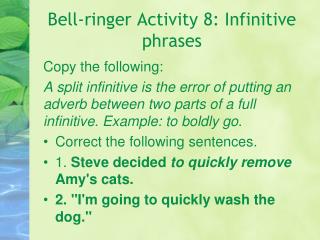 Bell-ringer Activity 8: Infinitive phrases. Copy the following: A split infinitive is the error of putting an adverb between two parts of a full infinitive. Example: to boldly go . Correct the following sentences. 1. Steve decided to quickly remove Amy's cats. Bell Ringer - . pull out ch 18 reading notes and grapes chart. hand in quiz correction (in the back of the room) .

Bell Ringer - . complete the analogies bell ringer (both sides) and keep it at your desk. we will review it in a moment.

Infinitives and Infinitive Phrases - . an infinitive is a verb form that usually begins with the word to and acts as a

Bell Ringer - . what were the 6 main countries to start world w ar ii? (not the us) what is appeasement? what is

BELL RINGER - . if you could compare your life to a song, what song would you choose and why? ms. davis’s:

Bell Ringer Monday 09/15/08 - . before carlos zambrano’s no-hitter last night, who was the last cub to throw a

Bell Ringer 10/22 - . please get out both your character map and your background and context article. pd. 4 – get out

Bell Ringer 08/16/11 - . use your bell ringer chart to answer the questions below. remember this is worth a grade! what

Bell Ringer - . take out your thesis statement and check for the following: does it include a comparison and the names of