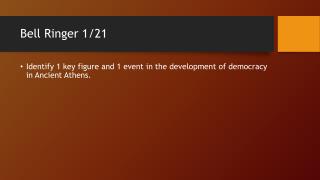 Bell Ringer 1/21. Identify 1 key figure and 1 event in the development of democracy in Ancient Athens. Bell Ringer 1/22/14. Reflect on your learning by writing in your Learning Log. Are you a 1, 2, 3, or 4? Explain what you know and what you are still unclear about. Standard 2 - . part 2: how ecosystems work. bell ringer, 9/4. get your tribe points get out your squirrel island hand out

Reading Bell Ringer Tuesday, November 9, 2010 - . think about the last time you asked someone to do something for you