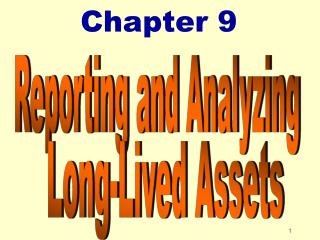 Chapter 9. Chapter 9 Reporting and Analyzing Long-Lived Assets. After studying Chapter 9, you should be able to: Describe how the cost principle applies to plant assets. Explain the concept of depreciation.

Chapter 19 Reporting and Analyzing Cash Flow - . in this chapter…. purpose of the cash flow statement. purpose: is to

Dinosaurs Lived Long Ago - . by: cara edenfield g roupbygroup.wordpress.com. triceratops was a plant eater with 3 horns

Impairment of Long-lived Assets including Goodwill - . includes comparison of us gaap and ifrs. impairment of long-lived