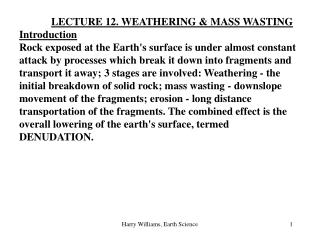 CHAPTER 10 - . weathering and soil formation. why are river rocks round?. tumbling in running water. what is weathering?.

Mechanical (physical) Weathering - . the process of breaking down sediment without changing the rocks chemical

How to pray (at) Mass? - . a look at the spiritual significance of the mass. introduction. you must have attended mass

Weathering and Erosion - . what is weathering?. weathering is process of breaking down and changing of rock at or near

The Catholic Mass - . what is the purpose of mass?. complete the k-w-l chart on your handout. the mass. the catholic mass