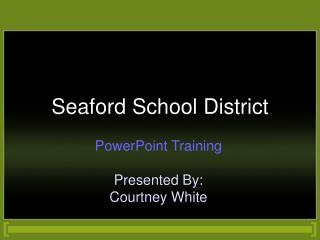 Seaford School District. PowerPoint Training Presented By: Courtney White. Welcome and Introduction . Welcome Today’s Agenda Our Goals. Agenda. Enhancing our teaching through the use of PowerPoint Welcome to the Seaford Middle School Media Center - . biography. what is a biography. it is an account of a person's life

Seaford Plastic Surgery - Plastic surgery is only for women: men currently represent 15 percent of the total number of

WILKINSBURG SCHOOL DISTRICT - . 4 sight benchmark assessment. 05-06 . the wilkinsburg school board and the administration

Elmwood School District - . bullying prevention in our school. what is bullying? is it really different t han fighting or