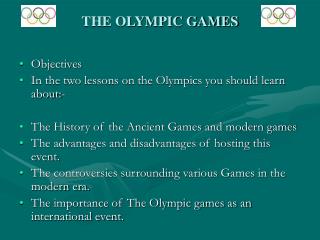 THE OLYMPIC GAMES. Objectives In the two lessons on the Olympics you should learn about:- The History of the Ancient Games and modern games The advantages and disadvantages of hosting this event. The controversies surrounding various Games in the modern era.