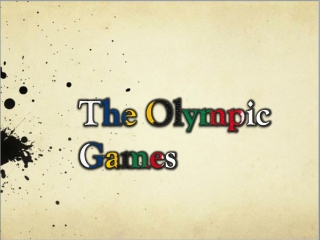 The Olympic Games. The Purpose of the Olympic Games:. To encourage the spirit of fair play, ethics and governance in sport. To educate youth though sport. To support the development of sport and sports participants. To promote the principle of equality and sport for all.

CHOLESTEROL 10/02-03/07 - . learning objectives 1) to identify the structure of cholesterol 2) to outline the synthesis

07 Dec 2010 - Unclassified. how opportunistic is it for prognostics products to transition?. presented by: philip

Open arms, welcome me close to Your heart There I long to stay - . mercy falls cleansing my life in your blood whiter

The Life and Mission of CFC - . what is couples for christ?. catholic international association of faithful, recognized

Rewind ~ The Kind of Giving God Responds To: Our Best (The Widow’s Offering) - Our most valued (the alabaster box) our