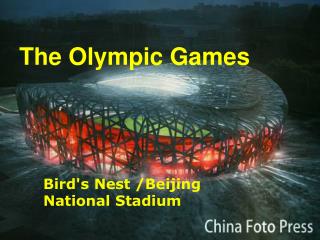 The Olympic Games. Bird's Nest /Beijing National Stadium. Competition. How much do you know about the Olympic Games?. torch. What are the official mascots for the Beijing Olympics?. fish . panda. Tibetan antelope. swallow. They mean “Welcome to Beijing!”.

The Effective Use of PowerPoint Presentation in Teaching Japanese - . hamilton girls’ high school masa ogino. a

How to make a Poster Presentation in PowerPoint - . by gericke sommerville march 21, 2003. objectives. understand the

Effective Presentation - . presentation as a communication tool. important thing for an excecutive to give a report of

How to use this PowerPoint presentation - . to watch the powerpoint, click on the “slide show” menu and then “view

PowerPoint - How to use this powerpoint presentation:this presentation is an introduction to the various elements of the