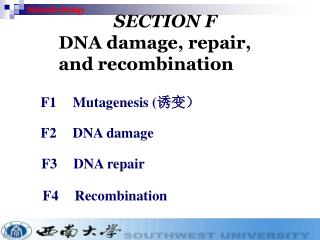 A. An overview of molecular biology - . read human molecular genetic ch. 1 a.1. background a.2. macromolecules a.3. dna

Chapter 10: Transcription in Bacteria - . few proteins have had such strong impact on a field as the lac repressor has

APPLICATION OF MOLECULAR BIOLOGY TO AGRICULTURE - . what are transgenic crops? steps in the development of transgenic