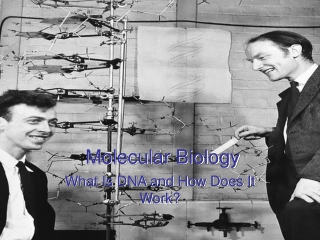 Molecular Biology. What Is DNA and How Does It Work?. DNA Structure Must Be Compatible with Its Four Roles. DNA makes copies of itself. Occurs during S phase of the cell cycle before mitosis or meiosis. DNA encloses information. Information that gives rise to discernible traits in organisms.