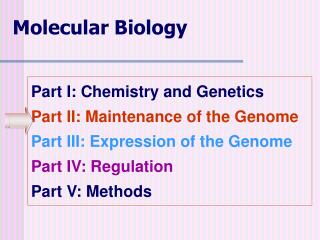 Molecular Biology. Part I: Chemistry and Genetics Part II: Maintenance of the Genome Part III: Expression of the Genome Part IV: Regulation Part V: Methods. Ch 6: The structures of DNA and RNA Ch 7: Chromosomes, chromatins and the nucleosome Ch 8: The replication of DNA