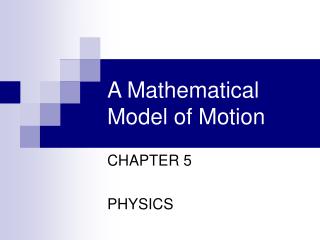 A Mathematical Model of Motion

A Mathematical Model of Motion. CHAPTER 5 PHYSICS. 5.1 Graphing Motion in One Dimension. Interpret graphs of position versus time for a moving object to determine the velocity of the object Describe in words the information presented in graphs and draw graphs from descriptions of motion

A Mathematical Model of Motion

Cost-Volume-Profit Analysis: A Simple Model for Evaluating Decision Options - A model is always an abstraction. it is a