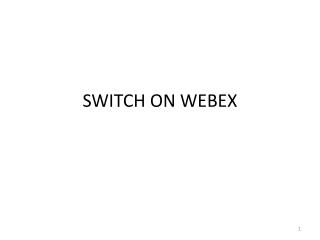 SWITCH ON WEBEX. How To Do Things W ith Diagrams September 13, 2012. Barry Smith. How to do things, with diagrams. W iggers Diagram, Cardiac Cycle, Left Ventricle. Two directions of fit. world-to-mind and mind-to-world direction of fit WebEx - . trainings and meetings. what you’ll learn. how you will be invited to a webex event how to join a webex

WebEx Basics - . welcome to our webinar!. plug in your headphones and click yes to get started!. we’ll get started in

6TSCH Webex - . 05/17/2013. add note on visibility. it is our collective responsibility to make 6tsch visible and attract

WebEx Pilot Rollout - . april 30, 2009. background. during the march 2009 rms leadership meeting it was suggested that