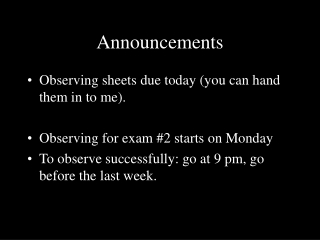 Announcements. Observing sheets due today (you can hand them in to me). Observing for exam #2 starts on Monday To observe successfully: go at 9 pm, go before the last week. Star Formation. The stuff between the stars Nebulae Giant molecular clouds Collapse of clouds Protostars

Announcements - Reading assignments on the syllabus must be done before the lecture read ch. 6 before next lecture read

Announcements - . summer reading submissions are due at 12:00 tonight! please submit! for extra credit, please bring in

Announcements - . no gospel papers for the rest of the semester exam corrections need to be in no later than december 10

Announcements - . office hours have been set if you complete labs at home beforehand, no partner needed. cs24 lecture 2.

Announcements - . visual turn-in! if you donâ€™t have it today, you can still bring it! ïŠ physical visuals:

Announcements - . outline. time, clocks and the ordering of events in a distributed system leslie lamport. problem –