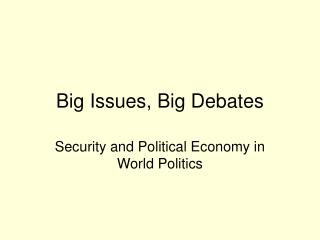 Big-Picture Issues - . what is sakari’s overall international strategy? what does it want? what is nora’s overall

big big world - . i have our arms around me ooooh like fire but when i open my eyes u're gone !. 1.i can see the first

Big Data, Big Knowledge, and Big Crowd - . anhai doan university of wisconsin . the world has changed; now everything is

Big Data Big Data - Part of the sns worldwide group, sns telecom & it is a global market intelligence and consulting