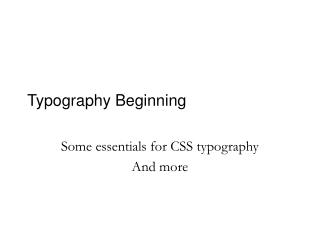 Typography Beginning Some essentials for CSS typography And more Font History Type faces written to imitate written script At the beginning of the era of movable type, manuscript books were the real thing, and printed books were imitations The Gottingen Model Book c. 1450 Gutenberg

typography - T. is the art and technique of arranging type. typography. we generally think that correcting grammar,

Typography - . 1.01 investigate typefaces and fonts. what’s the purpose of design?. to grab the reader’s attention

Typography - . you only notice typography if it’s wrong. what is it? . communicating with the printed word good

Typography - What font am i? typography intro. type is emotional on a subliminal level because of the connotations it

Typography - . for technical writing . there are two basic types of font: serif and sans serif both of the fonts above

Typography - . anatomy and usage of type for publication. typography for designers. words and pictures once were the

Typography - Definition of typography. classic: layout of letters and spacing to convey meaning and understandingmodern:

Typography - . antonio. multimodal. “the idea that all modes need to be considered with the same kind of detail, as

TYPOGRAPHY - . what is typography?. goals of typography. develop a critical eye choose and use type with sensitivity and