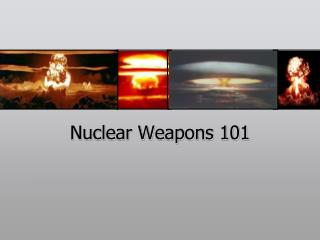 Nuclear Weapons 101. “The nuclear bomb is the most anti-democratic, anti-human, outright evil thing that man has ever made… This world of ours is four thousand, six hundred million years old. It could end in an afternoon.” Arundhati Roy. Walter Herdeg. Nuclear Weapons 101 - . “the nuclear bomb is the most anti-democratic, anti-human, outright evil thing that man has

Nuclear Weapons - . how do they work? fyp presentation by: wesley satterfield. outline. understanding the nucleus how a

Nuclear Weapons - . 5113. number of operational warheads in the u.s. nuclear stockpile, according to the pentagon. the

Nuclear weapons dangers - . “today, the cold war has disappeared, but thousands of those weapons have not. in a strange