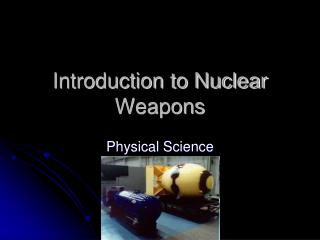 CONCEALED WEAPONS UPDATE - . prepared by vicki bailey, 9-15-03 tennessee board of probation and parole revised may

Inuit Tools &amp; Weapons - . by melina idlout. tools and weapons of the inuit . the inuit use all different kinds of

As A Community We Face Many Types of Disasters…… - . weapons of mass destruction. cbrne chemical biological