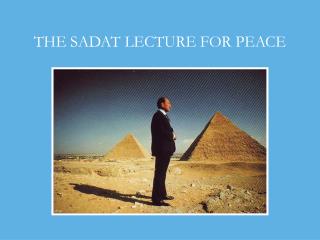 Sadat Er a - . by: farah, baheya , and hania. the beginning of the era. 3 rd president of egypt followed gamal

THE QUEST FOR PEACE - . the quest for peace. men are created to live in harmony we are designed to seek peace in order to

THE “Peace” - . imagine there's no heaven it's easy if you try nowhere below us above only sky imagine all the people

Education for Peace - Peace week 2013. education for peace. on august 6 th 1945 an atomic bomb was dropped on hiroshima

Partnerships for Peace: - . nestlé s. a. in the developing nations. “the most dangerous place in the world”: india

LETTERS FOR PEACE - . iraq / usa. letters for peace. the purpose: open channels of communication between young people of

Pennies for Peace - . combating globalization one penny at a time. from the eyes of a child. allows students of all

Cranes for Peace - . the sadako sasaki story. in the beginning…. hiroshima - a once a peaceful city on the coast of the

Books for Peace - . what is books for

Land for Peace - . hizkiyahu trading ke lim for peace. hizkiyahu. hizkiyahu was born in 739 bc and died in 687 bc at the

Proposal For Peace - . by meredith satchwell. history of conflict between israeli jews and palestinians. a long time ago