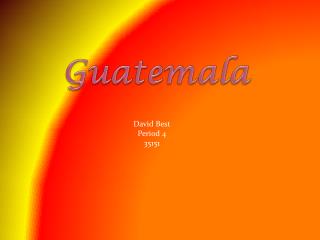 Guatemala. David Best Period 4 35151. Flag and Map of Guatemala. How to dress for business. For business, a lightweight suit is appropriate for men. Women should wear a dress or skirt and blouse. Military clothing cant be worn nor brought into the country. I present to you Guatemala !  - . in e nglish. by shelbi jefferson. money$$$$.