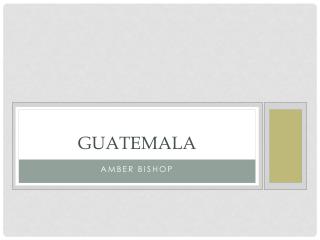 Guatemala . Amber Bishop. Location . Is located in Central America at the southern tip of the Caribbean Sea and the Pacific Ocean. Is slightly smaller than the state of Tennessee. Latitude and Longitude: 15 degrees north and 90 degrees west. climate. Guatemala: - . process of customs modernization and transparency. 2004.2007. guatemala. the largest economy in central

Guatemala - . david best period 4 35151. flag and map of guatemala. how to dress for business. for business, a

Guatemala - . by: fly around the world travel agency. location. guatemala is located in north eastern central