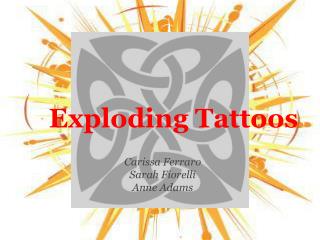 Exploding the Moment - . how to make your writing da bomb!. how to explode the moment. show! don’t tell! zoom lens

Exploding Ants - . day 1. concept talk. how do animals adapt to survive?. partner share. think about why animals might

Exploding Ants - . day 2. concept talk . how do animals adapt to survive?. partner share. why are adaptations a necessary

Tattoos explained - . by dike granado. what is a tattoo?. a form of body modification whereby indelible ink is inserted

Exploding Ants - . day 4. concept talk . how do animals adapt to survive?. puffer fish. so this is what it looks like in

Exploding quotes - . connector. which is the hardest part of peas? think / pair / share. lo – to learn how to choose