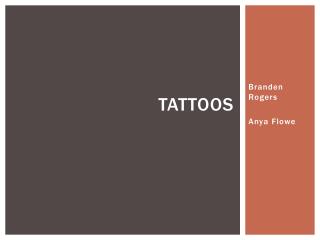 Tattoos. Branden Rogers Anya Flowe. History of Tattoos. The word tattoo is said to have come from the Polynesian word ‘ta’ which means “striking something” and the Tahitian word ‘ tatau ’ which means ‘to mark something’. Geographic distribution. Tattooing is massively diverse Dragon Tattoos - Who isn't fascinated by dragons? dragons hold our attention because, in addition to being powerful

Tattoos Edmonton - A tattoo is a form of body modification where a design is made by inserting ink, dyes and pigments,

Tattoos explained - . by dike granado. what is a tattoo?. a form of body modification whereby indelible ink is inserted

Animal Tattoos- Tattapic - Do you have a specific animal tattoos configuration at the top of the priority list? on the

Fake Tattoos chicago - If you are looking forward to look cool without wasting long hours and experiencing pain, then

Tattoos and Piercing - . what the bible says about tattoos and body piercing. introduction. use caution here the

Best Tattoos Designs - A tattoo is a form of body modification where a design is made by inserting ink, dyes and

Tattoos as Art - . design and genre of tattoo over the centuries. chasity. inspirations. my design shows a snake and two