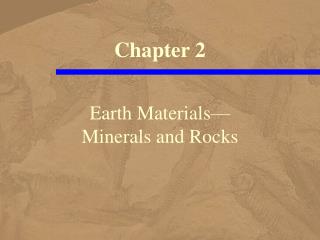 Chapter 2. Earth Materials— Minerals and Rocks. Earth Materials – Minerals. Gemstones and other minerals, such as gold, have fascinated people for thousands of years and have been supposed to have mystical or curative powers Minerals have many essential uses in industrial societies Rocks and Minerals - . science 2201. grains of sand…. many ongoing processes constantly change the surface of the

Structure of the Earth and the Rock Cycle - . lithosphere composed of minerals. definition of “ mineral” ?. silicate

Earth Science Unit 1.3 Rocks &amp; Minerals - . elements. eight elements make up most of all minerals on the earth

Rocks and Minerals - . from dull to dazzling!. what will we learn?. what are rocks and minerals? what are the three basic

Minerals 101 - . an easy guide to understanding minerals. the earth’s crust is made of mostly rocks and soil. the rocks

Rocks and the Rock Cycle - . rocks. rock is a solid material made up of minerals or other substances. most of earth’s

Minerals - . the substances that make up rocks and earth’s surface. rocks.

Earth’s Rocks - . what are rocks?. rock – any naturally formed solid in the crust made up of 1 or more minerals may

Rocks and Minerals - . junior science. rocks and minerals. rocks may not be alive, but they can still tell us quite a lot

Rock! - Rocks. rock!. if you think rocks are boring. think again!. rocks are all around us!. have you ever wondered where

MINERALS - . what are they??. minerals. the basic materials of the earth’s crust. the “building blocks” of rocks