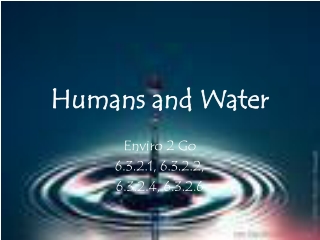 Water, Humans, and Civilization - . the first organisms. must survive in low-oxygen environments could not eat other

Water, Life, Humans, and Civilization - . the first organisms. must survive in low-oxygen environments could not eat

Humans and aging - . olivia wallden. can aging be induced early?. -high levels of stress -not eating healthy -not

Humans and Minibeasts - . questions to think about. what effect does human behaviour have on mini beasts and their

Ecology and Humans - . chapters 3, 4 (up to biomes), 5, 8. levels of organization in ecology. ecology is the study of

technology and humans - . a ubrey lopez. what i observed…. i observed my prob and stats class with 22 students and one

Humans and Animals? - . do humans and animals have the same genetic codes for the same

Flooding and Humans - . this will occur when streams receive more water than their channels can hold, i.e. when stream

HUMANS - . tree of life. back in time →. (not to scale). the blue dots represent our most recent common ancestors!.

Humans - . humans. humans form an important part of human-computer interaction the limitations of humans influence how