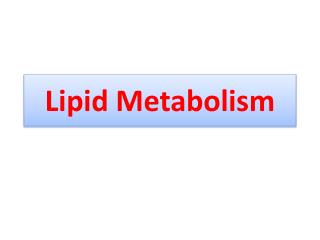 Lipid Metabolism. Digestion and Absorption of Dietary Lipids. Lipids are taken in the diet mainly as triacylglycerol . In addition, small amounts of phospholipids, cholesterol, carotenoids and fat-soluble vitamins are taken in diet. I- Digestion of Triacylglycerol. 1- Lingual lipase