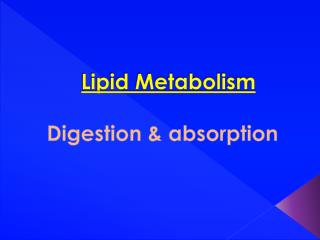 Lipid Metabolism. Digestion & absorption . Introduction Fat is a good source of energy as 1 gm supplies 9.1 calories, which is over double that supplied by carbohydrates or protein. Dietary lipids are ingested in form of