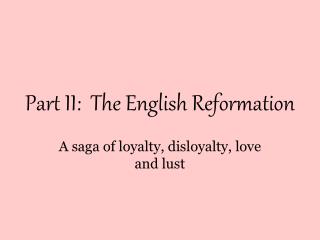 Part II: The English Reformation. A saga of loyalty, disloyalty, love and lust. If we remember, England had been through a long civil war prior to Henry VII’s succession. The objectives for this slide show are:. The Renaissance and Reformation - . what is the renaissance?. renaissance means rebirth…. of learning, knowledge, and

English I - . week of 19 to 23 may. 19 may. warm up: semicolons today’s agenda: introduction to shakespeare shakespeare

Early Church to the Reformation - . bi 3321. texts on the persecution of the early christians . compiled by michael

Practical English, Book II - . unit 6 part a. do animals have a culture? lectured by cheng chunlan. unit 6: part a.

CHY 4U0 – West and the World Unit 1- Renaissance and Reformation - . powerpoint has new layouts that give you more ways