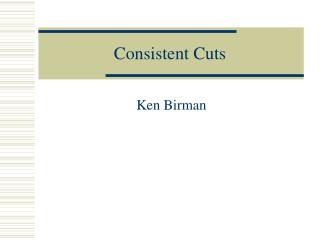 Consistent Cuts. Ken Birman. Idea. We would like to take a snapshot of the state of a distributed computation We’ll do this by asking participants to jot down their states Under what conditions can the resulting “puzzle pieces” be assembled into a consistent whole?. An instant in real-time. The Provincial Cuts: A Summary, The Impact, and Some Support - . first presented at the “mid-term crisis: exposing the

Are You Audit Ready? - . presented by donna collins milestone professional services. are you audit ready?. things that

PRONOUNS - . our handy, dandy, friends… they give us short cuts!. pronouns. takes the place of a noun or a pronoun the