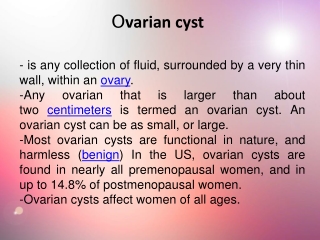 O varian cyst. - is any collection of fluid, surrounded by a very thin wall, within an  ovary . -Any ovarian that is larger than about two  centimeters  is termed an ovarian cyst. An ovarian cyst can be as small, or large. Sebaceous Cyst - Http://www.healthwhoop.com/sebaceous-cyst/ sebaceous cyst is a minor, closed pouch under the skin that

Pilonidal Cyst - A pilonidal cyst is a development variation from the norm that happens at the base of the back , which

Varian / RapidResponse Overview - . varian semiconductor is the market leader in ion implantation tools for the