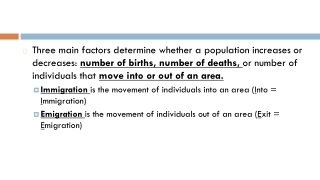 Three main factors determine whether a population increases or decreases: number of births, number of deaths, or number of individuals that move into or out of an area. Immigration is the movement of individuals into an area ( I nto = I mmigration) Population and Urbanization Chapter 13 - Population. sociologist study population to consider the rates at which people

Regression with a Binary Dependent Variable - . introduction. what determines whether a teenager takes up smoking? what

Population - . population biology and human population. essential question: how many people can sustainably live on

Population Ecology - Campbell biology ch 53. population ecology. which do you think is the most important in population

Changes to Populations - . 4 factors that effect the size of a population . increase population 1) birth 2) immigration

Population, Resources, Environment - . stevan harrell anth/sisea 406 15 january, 2014. what do we need to know about

Population Growth - . a population is…. a group of organisms, of the same species, that live in the same location. ex:

Chapter 2: Population - . key questions/big ideas. where is the world’s population distributed? where has the world’s

Population Geography I - . the where and why of population density distribution demographics (characteristics) dynamics.