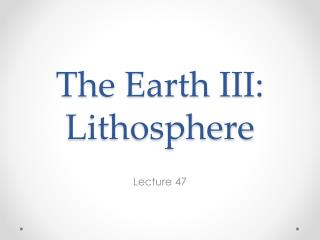 Earth ’ s Lithosphere - . “ in the developed world. . we no longer honor our relationship to the soil. . . soil has

The Lithosphere - . what are the different types of rock? how does the rock cycle affect different phenomena in our

The Lithosphere - . living on shaky ground. the lithosphere is the outer shell of the earth including the crust and the

UNIT 3B The Lithosphere - . basketball review. question 1. who is considered to be the “father of modern geology”?

LITHOSPHERE - GLACIATION - . severn thames line. the ice age. the ‘ice age’ was a series of advances and retreats of

Unit III: The Earth in Space - . celestial objects. any natural object “outside” the earths atmosphere (seen in the