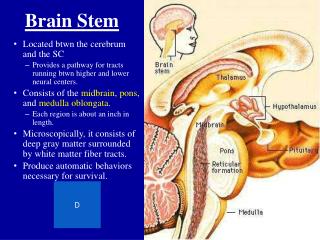 Brain Stem. Located btwn the cerebrum and the SC Provides a pathway for tracts running btwn higher and lower neural centers. Consists of the midbrain , pons , and medulla oblongata . Each region is about an inch in length. Biological Bases of Behavior: The Brain - . introduction:. the mature brain weighs about 3 lbs and contains about 1

Biology &amp; Behavior - . the brain. divisions of the brain. hindbrain, located at the rear base of the skull