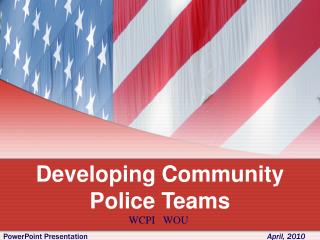 Developing Teams - . leadership in groups &amp; teams. groups, teams, and their leadership. “we are born for

Developing Worship Teams - . what is worship?. worship is not something that is done to people or at them or for them

School Community Police Officers South Wales Police - . question 1: one unit of alcohol is…?. a. a pint of beer. b.

Community Volunteer Police Patrol - . paso robles police department. if you have the time, we have the job for you!.

DEVELOPING EFFECTIVE TEAMS  Chapter Six - . how teams differ from groups. note: all teams are groups but not all

Developing High-Functioning Leadership Teams - . presented by tina nazier, mba may 27, 2016. agenda. what does a