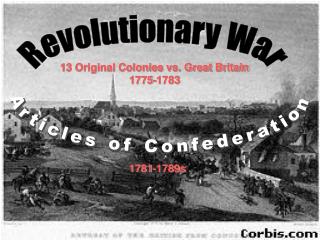 Chapter 6 The War for Independence 1774–1783 - . key questions:. why did tensions mount with britain? how and why was

Crisis in the Colonies - . 1745-1775. objectives. discuss how the rivalry of britain and france led to war in north

The Black Loyalists - . the american revolution or the war of independence. 1775 to 1783 an armed conflict broke out