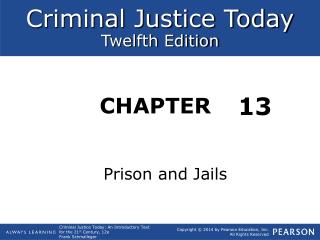 Jails - . the drusilla of institutional corrections do not pass go, do not collect $200. jail history. the oldest form of

Chapter 13 Prisons and Jails - . learning outcomes. lo1: list the factors that have caused the prison population to grow

WOMEN AND PRISON - . the reality of women’s experience in prison. history of women in prison: a social barometer.

Prison Life: Living In and Leaving Prison - . prison. more than 1,600 adult correctional facilities in us many

Leaving Prison and Housing - . introduction and context. key statistics. ministry of justice found that 15% of prisoners

Human Rights and Prison - The subject of human rights, in no way, shape or form, is a restricted subject. there is not

Prison and Asylum Reform - . the prison reform occurred during the early 1800's following the temperance movement.it was

Chapter 12 Prison Life: Living In and Leaving Prison - . learning objectives. discuss the problems of the adult