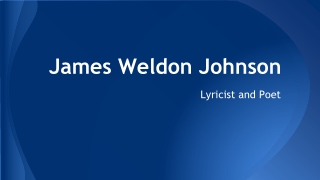 James Weldon Johnson. Lyricist and Poet. Personal and Literary Biography. First African-American to pass the bar in Florida while he was working as the principal at his former elementary school Autobiography of an Ex-Colored Man --the first novel to treat Harlem and Atlanta as subjects. Michele Weldon JAWS September 2011 - Women, war and memoir: the civil war to iraq and beyond the arab spring . michele

Johnson &amp; Johnson - . research indicates that moms go online to get information about their newborn babies.

20 Things You Should Know About James Johnson Jersey - Customize your game with the adidas f50.8 tunit soccer boot. after

The Neuro-Slimmer System PDF, eBook by James Johnson - Discover the truth and the facts about the neuro-slimmer