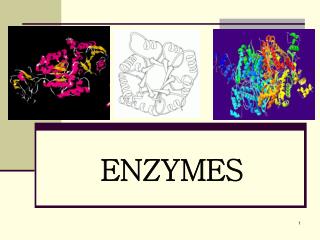 ENZYMES. History of Enzymes. -1700s and early 1800s, the digestion of meat by stomach secretions and the conversion of starch to sugars by plant extracts and saliva were known. --mechanism by which this occurred had not been identified. History of Enzymes. Enzymes - . have properties shared by all catalysts enhance the rates of both forward and reverse reactions so

ENZYMES - . in the biology unit on digestion, you’ve studied enzymes , and how they breakdown foods so that our bodies

Enzymes - . spontaneous reactions?. if reactions are “downhill”, why don’t they just happen spontaneously? because

Enzymes - . the essential key to the functioning of all cells. enzymes -. are proteins act as organic catalysts, which

Enzymes - . lab 5. enzymes. reaction characteristics e nzymes are catalysts : substances that speed up or facilitate a

Enzymes - . enzymes are proteins enzymes are catalysts - substances that speed up reactions without being altered in the