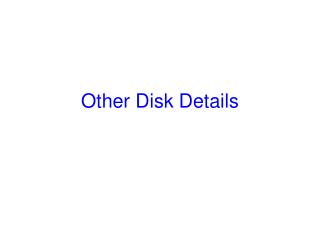 Other Disk Details. Disk Formatting. After manufacturing disk has no information Is stack of platters coated with magnetizable metal oxide Before use, each platter receives low-level format Format has series of concentric tracks Each track contains some sectors Deck Footings – Types, Importance & Other Details - Deck footing is a structure to create a sturdy foundation for

Loan Against Property - Interest Rates, Tenure & Other Details - Loan against property is a secured credit that can

5 Exquisite Kitchen Designs Details like No Other - If you have a knack of cooking or have a dining area adjacent to it,

Disk Fundamentals - . more than one platter (round cylinders). websites with interesting info. putting a window in a disk

Magnetic Disk - . magnetic disks are the foundation of external memory on virtually all computer systems. a disk is a