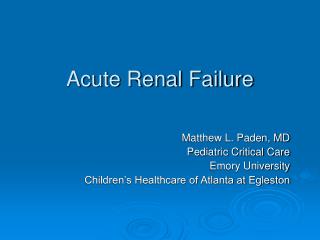 Acute Renal Failure. Matthew L. Paden, MD Pediatric Critical Care Emory University Children’s Healthcare of Atlanta at Egleston. Structure and Function of the Kidney. Primary unit of the kidney is the nephron 1 million nephrons per kidney Composed of a glomerulus and a tubule Renal Insufficiency - . “to be a great champion you must believe you are the best. if you’re not, pretend you

Acute Renal Failure - . what is acute renal failure?. renal failure associated with burns or other trauma or with acute

Acute Renal Failure - . a sudden deterioration of function of both kidneys leading to an inability to maintain the normal