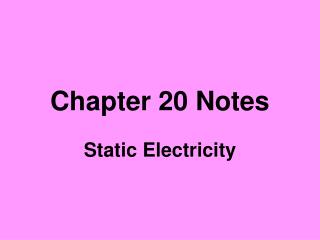 Chapter 20 Notes. Static Electricity. Ben Franklinâ€™s experiment in 1752 Electrostatics-The study of electrical charges that can be collected and held in one place, in other words, they are AT REST. Something about ATOMS. Chapter 19 and 20 Notes, Birds and Mammals - . characteristics of class aves. forelimbs designed for flight in most

Chapter Notes - . cornell style. notes from chapters. the general rule if thumb is one page of notes for every three

Chapter 1 Notes - . what is civics?. a branch of political science which focuses on the study of the rights and duties of

Chapter 2 Notes - . why did the europeans come to north america?. asian trade routes were blocked by the rising ottoman

Chapter 18 Notes - . earth’s spinning on its axis is called its rotation. earth rotates on its axis every 24 hours. the