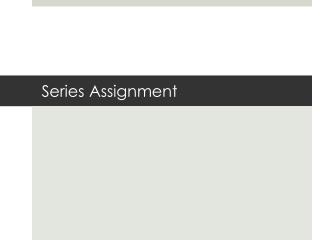 Series Assignment. The Assignment –Due May 27. Four to six 8x10, (no extra credit) (spot corrected images, contrasted, dodged and burned) and contact sheet due at the beginning of class. A series is a group of photos about one subject. Series Assignment - . the assignment. four 8x10 spot corrected images and contact sheet due at the beginning of class. a

Series - . in mathematics, given an infinite sequence of numbers

Series - . introduction. chapter 5 of fp1 focuses on methods to calculate the sum of a series of numbers the main focus

SERIES - . def:. a sequence is a list of numbers written in a definite order:. def:. is called a series.

Series - . opportunity. ctv market is de-growing there is a stronger need among middle/lower middle class to enter this

Series - . does n th term go to zero?. yes, series might converge no, series definitely diverges ( the sum of the series

series - . agenda: stage one your stage one status thinking about assessment. session 7. i know now…. the context of my