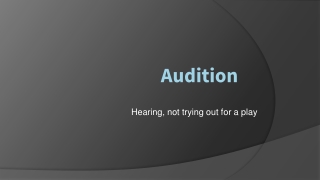 Hearing, not trying out for a play. Audition. Audition. Begins with sound entering the ear Sound is mechanical energy typically caused by vibrating objects. Vibrations produce movement of air molecules (sound waves). Moving one’s head helps in detecting the source of a sound.