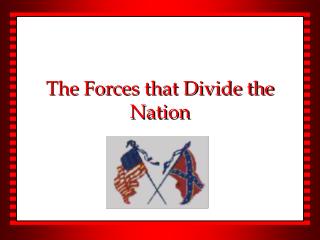 ISSUES THAT DIVIDED THE NATION - . sol u.s. i.9a. slavery. while there were several differences between the north and the

Forces That Shape the Earth - . state objectives 4.a.-4.b. structure of the earth. share some different structures that

Forces that shape the earth - . by: joe andrews. plate tectonics . there are ten things that have to do with plate

Forces That Shape The Earth - . ms.m.v.n.k.jyoti k.v.s.v.p.n.p.a .shivrampally. introduction. the earth is shaped by both

The Ten Forces That Flattened the World - . chapter 2. #1 – the new age of creativity: when the walls came down and the

The War That Divided A Nation - . by: sarah macklin. why did t he c ivil w ar

Ten Forces That Flattened the World - . 1. 11/9/89: when the walls came down and the windows went up. ten forces that

Forces That S hape the Earth - . by: shay and abby. plate tectonics . it is the scientific theory which describes the

FORCES THAT CHANGE THE SURFACE OF THE EARTH - . mountain range, canyon, &amp; delta. l andforms are subject to change

The Digital Divide - . by: andrew holoman, louis f. mendez, and javier peral. a social problem. 'it is a social issue