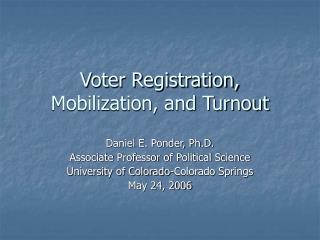 Voter Registration, Mobilization, and Turnout. Daniel E. Ponder, Ph.D. Associate Professor of Political Science University of Colorado-Colorado Springs May 24, 2006. Normative Questions. What is the function of a government in a democracy with regard to the political process? Voter Mobilization - . does it really work? a case-study at the university of central missouri. background. adp database

Voter Registration - . please wait for instructions before filling out the form. (do not work ahead.) write legibly. dorm