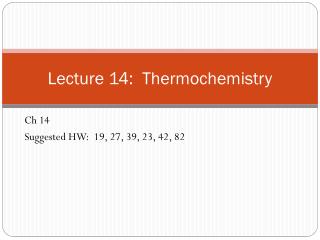 Lecture 14 - . chemical reaction engineering (cre) is the field that studies the rates and mechanisms of chemical

Chapter 14 Thermochemistry - . objectives: students will be able to understand…. concept of energy and its various

Lecture 14 - . gravitational potential energy. (force against gravity). lift by h. when the ball is released, there is a