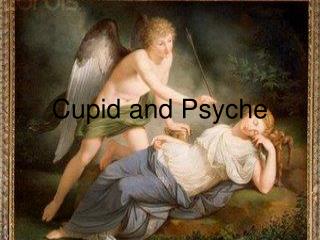 Cupid and Psyche. Psyche. Youngest daughter Best at everything and most beautiful Venus (Aphrodite) was jealous of her and wanted to get rid of her Men on earth worshipped her over Venus. Cupid. Son of Venus (Aphrodite) Was sent by Venus to bring about Psyche’s ruin Psyche and Cupid - . retold by: blakely, mariah, zoe, and kate . there were three daughters. the youngest one, psyche,

Cupid and Psyche - . retold by: genesis, samantha, anna, and hannah. once there was a irresistibly beautiful girl named

Cupid and Psyche - . by: annie jongebreur , michaela mccatty , emily gibson, and kimmie ahrens. a long time ago there was

Cupid and Psyche Apuleius - Apuleius, metamorphoses or the golden ass . apuleius lived from 125 to ca. 170 c.e. he wrote

Psyche Panacea - . let us grow together. psyche panacea : the forte. bellwether in training and development more than one

CUPID / eROS - The greek god of love. cupid / eros. some myths say that eros god of love was the son of aphrodite and

Message of Psyche and Eros - . your “ticket out the door” responses………. look at the responses from the