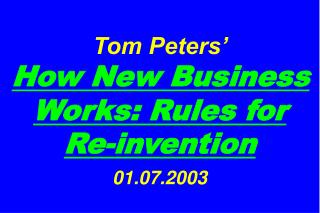 Tom Peters’ How New Business Works: Rules for Re-invention 01.07.2003. “If you don’t like change, you’re going to like irrelevance even less.” —General Eric Shinseki, Chief of Staff, U. S. Army. Business Ethics - . module one: getting started. there is such no such thing as a minor lapse of integrity. tom peters. a